Halani Lobdell on Embracing Being a Modern Day Superwoman 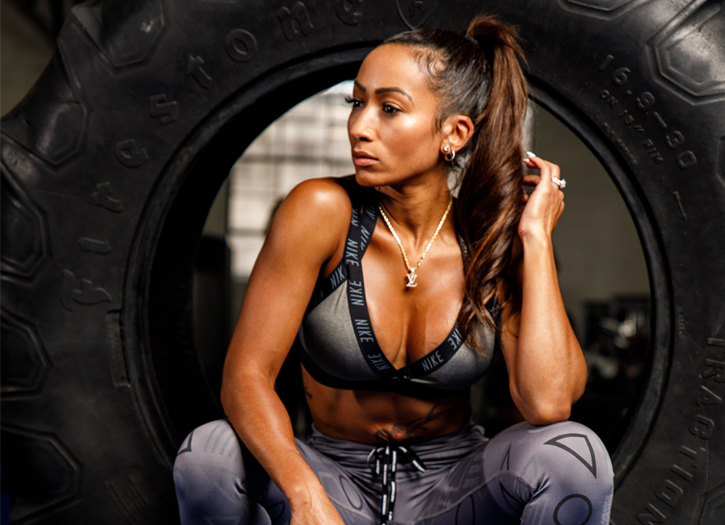 ‘I really am superwoman. I wear a lot of hats and I’m not trying to pat myself on the back, too much, but I wear them well. I do a good job at everything that I do and put my all into everything that I do.” The pride in Halani Lobdell’s voice is the perfect accentuating melody to her described journey from rejection to acceptance of being a developed phenomenon. The pride clearly linked to the efforts of this wife, business owner, fire chief, and mother of two who, consistently and strategically, curates a balanced, healthy, happy, and fulfilling life. “I’m just doing what works for the Lobdells” – the perfect call-to-action for any woman desirous of creating their ideal life which includes self-love – simply, do what works for you.

“Those who don’t jump will never fly” is an affirmation that Lobdell learned how to embrace. “In order to excel and accomplish your dreams and aspirations, sometimes you gotta jump… that’s when you discover just how high you can fly. It sounds kind of corny but it really makes sense…. those risks will show you just what you’re capable of.” Of her, constantly, stepping outside of her comfort zone, she says “I no longer operate under that stigma of being stable so to speak. I still want and like stability but I’m willing to take chances and certain risks that I wouldn’t have before.” Adhering to this thought process enabled her to make a name for herself in the fitness industry, co-owning The Loft Athletic Club with her husband and running the online Glute Camp Max with over 500 members..

Lobdell hopes that women, especially impressionable young girls like her 14-year old daughter, understand the importance of daily acts of self-love. “Everything that I do, as a woman, is to set an example for my daughter… my son too but mainly for my daughter because my son has my husband to look to as a manly figure.” In a time when gender equality is still an issue, she is glad that her daughter can look at her fire chief position as proof that barriers are mental constructs that can be overcome and that “we can do whatever we want to.” As she blazes her bright trail, Lobdell is careful to also illustrate self-care – taking care of one’s skin, hair, and nails – “I teach her all these things now so that when she becomes an adult, it’ll be second nature to her.”

Self-love in a marriage, “… plays a big role because being together for almost 21 years… being with someone that long, sometimes you can forget who you are and get consumed with that person… And, then being a mom too, you put everyone’s need above your own. So, you just have to balance that.” To do that, the regime of the woman who wears her many hats well involves doing things “that will make Halani happy too”. One of those – paying attention to her physical appearance. Despite her “husband being around women all day because of the industry that” they’re in, Lobdell’s confidence is solid. “I’m very confident in what I look like (and)… in the fact that he’s still attracted to me and I make sure that he’s attracted to me. And, he makes sure that I’m attracted to him. Making those things priority… helps me embrace that self-love that I need to operate as Halani.” This modern-day superwoman who stands at 5’2 and 118 pounds credits her positive attitude to her consistent support system. “Some days, I don’t know if I’m coming or going” but maintaining a schedule and being organized helps as well as being realistic with herself and knowing when to just stop and rest. “Sometimes, you have to take a pause and just reset.”

“Being healthy is necessary for everybody.” Regarding the message of the #LovingOnMyself #ICrushGoals to #ImpactTheWorld, she says “an unhealthy lifestyle may not, necessarily, affect you accomplishing your dreams but it will affect you in the long run. So, it can cut those things short.” Continuing on, she discusses the prevalence of preventable health issues “in the black community such as Type 2 diabetes and hypertension. Everyone has someone in their family who has” one of these “because of what they’re doing with their lifestyle. We’re at the point where we act as if it’s okay and, it’s not… being healthy is more than what you look like physically. It’s truly about what’s going on the inside… So, while you might be out here living your best life, (it) can be cut short so there is a correlation. Health is truly wealth.”

This forever-evolving phenomenon’s joy is contagious as she reflects on the journey that keeps her on her toes. She’s declared to never compete again, however, the former Figure competitor who won, in her Class, each of the four times that she commanded the stage, still adheres to the following. “I WILL BEAT HER. I will train harder. I will eat cleaner. I know her weaknesses. I know her strengths. I’ve lost to her before, but not this time. She is going down. I have the advantage because I know her well.” Somedays, she feels as if she is losing to herself however continues to strive to “be better than her. And, that’s what motivates me… to be better than I was yesterday.”

Those interested in being motivated by Halani Lobdell can follow her on IG @mrs2weeksout or by visiting The Loft Athletic Club, in Atlanta, GA. Online training options are available at www.glutecampmax.com

The #LovingOnMyself #ICrushGoals to #ImpactTheWorld campaign seeks to encourage women to impact the world by putting themselves first. By setting small health-related goals, crushing them, and slowly building up to larger and, long-lasting ones, women will strengthen their ability to keep changing the world. This article commemorates National Women’s Health & Fitness Day (Sept. 25th) which seeks to encourage women to take control of their health: to learn the facts they need to make smart health choices and to make time for regular physical activity.

Powered by Convert Plus