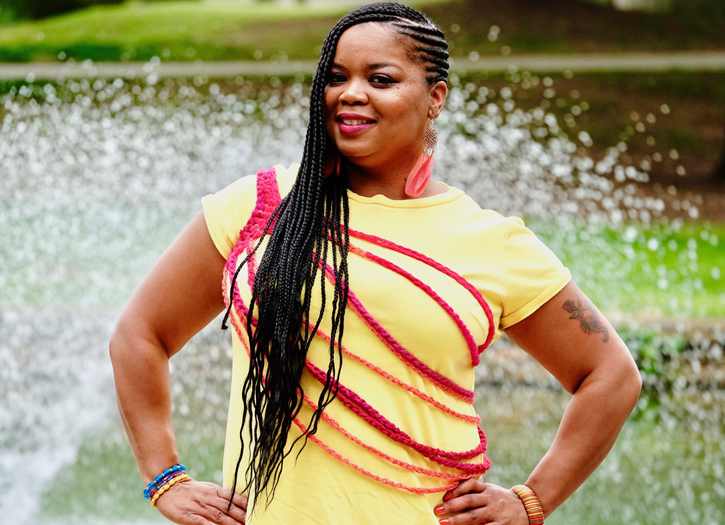 “We can complain because rose bushes have thorns, or rejoice because thorns have roses.” Tawanda Blake, author of three books, senior staff assistant, journalist, and mom personifies the aforementioned quote by Alphonse Karr. In 2013, her sister died of ischemia, leaving this mother of four to become the legal guardian of her nieces and nephews which rounded out her brood to eight. At 15, she lost her mother. Six years later, her oldest brother died, and by the age of 30, her maternal grandparents and five aunts and uncles. “Losing several loved ones at an early age, meant not having anyone to lean on during key life moments,” says Tawanda. These experiences led to her learning how to lean on herself and making one tone-setting choice every day. Every single day, she chooses positivity and, enthusiastically, greets those encountered with “Good morning kings and queens.”

Fueled by her experiences and desire to stroke the royalty she believes exists in each of us, Tawanda continues to be very transparent about her weight loss journey. With calm confidence, she says “We do not have to settle for the mediocrity that is presented to us. We should always think of ourselves of being in the bloodline of royalty so that we can strive for something higher than what’s been given to us. I feel as if I was destined to be something more superior than what was taught to me.” Continuing, she talks about watching her sister be in despair up until the day she died which also motivates her to be her brightest light even on the hardest days. “I empower myself to keep going, not just for me but for these kids because they deserve to have a functioning parent.”

Last year, Tawanda discovered that she was prediabetic, started having really bad heart palpitations, and fluctuated between 224 and 228 pounds. Additionally, she says “I didn’t like how I looked in my pictures, busting out of my clothes like the incredible hulk.” Having recently interviewed a fitness trainer, she recalled his talking about eating clean and exercising but had never thought of herself as one to do that. At a crossroads, Tawanda chose to change her narrative. Accepting the royalty in her, she got intentional about incorporating a health & fitness regimen into her life. “At first, I didn’t want to make it public but now, I use it for accountability.” Although her budget prevents her from meeting her trainer daily, he sends her meal tips and workouts so that she can stay on her new path. “I drink a lot of water, bring my sneakers to work so that I can jog the stairs every day, and cut out sugar, bread, and sugary snacks.”

Excitedly, she talks about how her boot camp class encourages the star within which helps her not give up on herself. Tawanda admits to, previously, being a stress eater but now using fitness activities to deal with stressors. “I like the way that I look and feel and that continues to be my motivation to keep going. I don’t want to look like I’m older than I actually am because I am overweight. I want to be healthier because I have children and I want to be here for them. Every decision that I make is surrounding my kids because they still need someone. Andddd, I want to be sexy for myself!! I’d rather be the Benjamin Button, no?” she says with a hearty laugh. To not fall back into the unhealthy ways of consuming food she doesn’t buy unhealthy foods into the home. “No temptations in the home!” she says.

Pensively, she talks about the correlation between attaining one’s dreams and their health. “If you’re sick and ailing, you can’t really focus on your dream because you’re worried about that. If you’re healthy, you can pretty much go out there and do anything that you want to do. They go hand in hand. If you’re healthy, you’re worry-free about that particular area of your life and able to go for your dreams. Tawanda now celebrates 25 pounds lost as well as no more heart palpitation nor being prediabetic. Regarding her role through the #LovingOnMyself #iCrushGoals to #ImpactTheWorld campaign, she says the following. “I want to encourage all queens, out there to be beautiful – especially single moms, aunties, grandmoms and, other women who stand in the gap. I want them to know that they can, also, accomplish these goals… if they try. And, that will further enable them to go out there, accomplish their life goals, and impact the world.”

The #LovingOnMyself #iCrushGoals campaign seeks to encourage women to impact the world by putting themselves first. By setting small health-related goals, crushing them, and slowly building up to larger and, long-lasting ones, women will strengthen their ability to keep changing the world. Its launch celebrated the 2019 Kimmie Awards which is dedicated to the illustrious woman and commemorated National Women’s Health Week which kicked off on May 12th.

Powered by Convert Plus